In the latest award ceremony, held on June 5, 2019, at Beit Halochem Tel Aviv, awardees for outstanding disabled athletes and their coaches included: 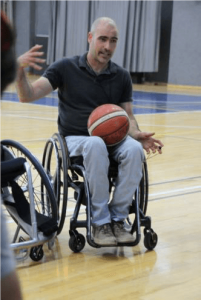 Roei Ben Tolila, in the Wheelchair Basketball category. He served as an officer in IDF’s elite Maglan unit, was injured in an offensive attack, and since then has been confined to a wheelchair. Married and the father of 4 children, he trains regularly at Jerusalem’s Beit Halochem and is a member of Israel’s National Wheelchair Basketball Team.

Amir Levy, in the Wheelchair Badminton category. Amir was wounded in 1996 while serving in the Paratroopers Unit. During his rehabilitation, he began playing tennis and badminton at Beit Halochem Jerusalem. Now he participates in international competitions and is ranked sixth in the world.

Hadar Bahat, for his achievements in Table Tennis.  Severely injured 16 years ago in a terror attack on the “Maxim” restaurant in Haifa when he was only three years old, Hadar was “adopted” by Beit Halochem where he continues his sports accomplishments. (In that same attack, 21 people were killed, among them his father.)

Hagit Bril, for her achievements in Table Tennis.

Sivan Abarbiya, for her achievements as part of the Women’s Goalball Team for the blind. The team represents Israel in international competitions and has accomplishes great things. 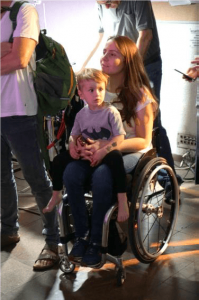 Nina Gorozsky, in Wheelchair Badminton. Nina has won several medals in singles and doubles. In the past year, she won first place in the European Championship Doubles and reached third place in tournaments in Brazil and Thailand.

Noah Ram, for his outstanding dedication as a swimming coach at Beit Halochem Tel Aviv.

Yelena Feitliher, for her great successes as a Latin and Ballroom Dancing coach at Beit Halochem Tel Aviv.

All Ages Turn Out for Beit Halochem