A LOVE FOR ISRAEL'S VETERANS

LEAVE A LEGACY - PHILANTHROPY IS A WAY TO CHANGE THE FUTURE

Israel was always dear to the hearts of Mike and Renia Cukier, z”l. Born in Sosnowiec, Poland, they grew up down the street from one another, and became childhood sweethearts. When the Second World War broke out, Sosnowiec was one of the first towns in Poland to be overrun by the Nazis.

Their story is recalled by daughters Doris Wiur and Terry Slavens. It is a tale of great courage and great loss.

“Both of our parents’ families were sent to Auschwitz… Our father’s family was killed in the camp, except for his two uncles. Our mother’s immediate family amazingly survived not just the camps, but also the death marches.” 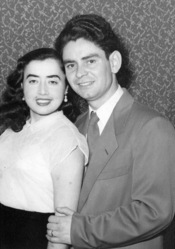 Their survival, and reuniting, epically spans Austria, Italy, Cyprus and Palestine, where Mike fought for Israeli Independence. In 1951, they finally reunited and married in Brooklyn.

Central to their lives was love for family and for Israel, especially the men and women who had sacrificed so much to protect the country. After retiring to Florida in 1986, Mike Cukier formed the first Florida Chapter of Friends of Israel Disabled Veterans (FIDV)-Beit Halochem. For many years, he and Renia worked hard to raise money for disabled Israeli war veterans.

“Our parents loved life, each other, and their family. Our father loved Israel and the US, his adopted country. The central theme in our parents’ lives was family … It’s hard to fathom and understand all that happened to the millions of people affected by the war, but what can easily be grasped is the love and sense of family, instilled in us from our parents. Now that they are gone, we miss them very much but know that they are together – as always, in love and with family.

The good deeds of Mike and Renia Cukier, and their family, live on through Doris, Terry and her husband Scott, and the Cukier grandchildren Adam Slavens and Jordan Slavens. Today they are continuing the legacy of Mike and Renia by their support of Israel’s guardians, helping wounded veterans and victims of terror attacks rebuild their lives.

Me’Dor Le’Dor / From Generation to Generation: You, too, can build a legacy of love for Israel’s bravest by including FIDV-Beit Halochem in your estate planning. Join our Warrior Legacy Society/Moreshet Lochamim by making a planned gift to FIDV-Beit Halochem.

Among the many ways to leave a legacy for FIDV-Beit Halochem you might consider:

Join them in supporting FIDV-Beit Halochem: Make this your legacy, too!

‘We are brothers with the same fate’