“I understood that even without a leg one can still advance in the army. I realized that I would have to learn to live with it.”

Lieutenant Colonel Ira Benimovich was born in Ukraine and immigrated to Israel at the age of 16 through the Na’aleh project of the Jewish Agency, which helped young adults like her make Aliyah to Israel.  Now 39 years old, she is the mother of three daughters.

Upon completing high school, Benimovich was accepted by the IDF academic program and studied Electrical Engineering at Ben Gurion University.

Once she received her degree, she enlisted in the army where she completed the IDF officers’ course. She was assigned to the IDF Land Technology Division and at the time of her injury, she was serving as head of the Technology and Maintenance Corps, the division in charge of setting up the electronic observation systems along the Egyptian and Syrian borders.

On February 4, 2015, she set out with her team to install the equipment near the Syrian border. After a few hours of work, Ira was severely wounded when she stepped on an old landmine. She was evacuated to Rambam hospital in Haifa, where her right leg had to be amputated. Ira underwent several surgeries during that week.

“In a matter of seconds, everything changed,” she recalls. “I was about three meters from the fence, and then there was an explosion. I was completely aware [then] that I did not have a leg, I began to crawl on my back, I pushed myself through. I [collapsed] on the ground, then lay in the hospital, then experienced the amputation.” 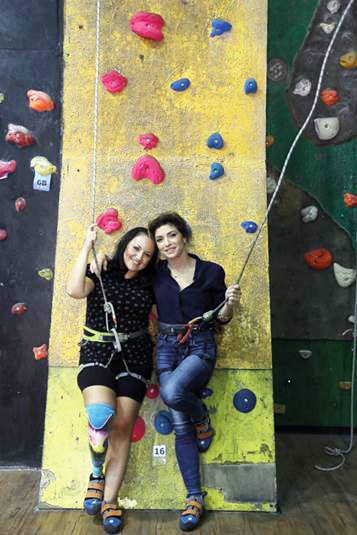 Ira Benimovich at the climbing wall with Adi Ashkenazi.

“I was just a few months after giving birth, and I told myself that if I survived the pains of childbirth, I would survive this pain as well,” she continued. “When I got to the Rambam Hospital, I was taken straight to the operating room.”

She could have given into despair at this unexpected change to her body and life. But, Ira notes, “For me, the only option was to get up, literally, and do whatever it took to get back on my feet.”

The long road to recovery brought Ira to Beit Halochem Tel Aviv, where she received rehabilitation treatments and joined the activities of the Beit Halochem Wall Climbing Club.

“When I woke up at the hospital, I knew I would have to go back to my routine, and once I was released from the hospital,” Ira states. “I wanted to get to the base … I wanted to go there before I got home.”

Her rehabilitation process has been long and hard, throughout which she fought tenaciously to regain her full functional abilities. The Wall Climbing Club is a key piece in helping her work to overcome the emotional and physical challenges.

For Ira, the army is something much more meaningful than just work. “When I arrived at the base for the first time after the injury, I felt I was coming back to life.”

Just two years after her injury,  she was appointed to the rank of Lieutenant Colonel and to her current position at the IDF Combat Equipment Center.

“Today, I can say wholeheartedly, I have not given up and I am here to continue, to develop myself,” says Lt. Col. Benimovich. “I want to stretch the boundaries and leave the comfort zone. ‘Where there is a will, there is a way’, is not just a cliché.”