Fernando Gotthilf, now 25 years old,  was born and raised in Brazil. At age 9, his family moved to Miami, and in 2008, when Fernando was 16 years old, they made Aliya, settling in Ra’anana.

He was drafted into the Special Forces of the Giv’ati Brigade.  He graduated from Squad Commander’s Course, and in July 2011, he and his company were sent to the north, to the border with Lebanon/Syria. In the area of Har Dov, they were informed that terrorists had infiltrated into Israel.

His Company Commander led the way as they went in pursuit of the terrorists.  Fernando and his squad followed right behind.  Just as his commander took refuge, Fernando was ambushed. The terrorists had shot him; a bullet penetrated his side and wreaked havoc in his internal organs and spine. He lost all sensation in both of his legs from the knees down.

The terrain was rugged, and a helicopter could not land to evacuate him.  He laid low until rescuers could put him on a stretcher, then move him to a Hummer, which rushed him to an ambulance. The ambulance then took him to a helicopter, which flew him to Rambam Medical Center. 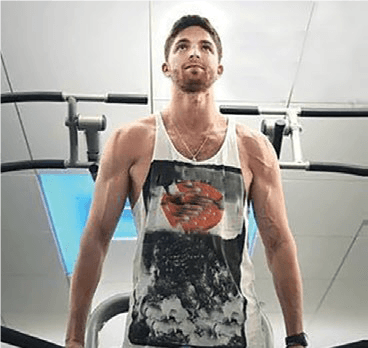 Fernando works out at the Beit Halochem Fitness Center in order to regain his strength.

“As my life was hanging in the balance, with devastating wounds, I vividly remember every detail of my team risking their own lives in order to rescue me,” recalls Fernando. “The next painstaking 10 months are more of a blur, as I struggled physically with the extensive damage [to my body], and emotionally with my new situation.”

Fernando spent 2 months in intensive care at Rambam, followed by a difficult 7 months at Tel Hashomer’s rehab center, where he relearned many basic skills including how to get off the bed, get onto a wheelchair, get up from a wheelchair, walk with a walker, walk with crutches, and finally, walk with a cane.

“Step by step. Rehab requires a lot of dedication, time and patience,” Fernando notes. “You have to put your mind into it … and push through.” He credits his parents for being his biggest support. Today, Fernando has custom-made braces on each leg, and he can walk with the help of a single cane.

“They pushed me  … to get me ready for everyday life,” he recalls. “Each day I try to go forward a little more.”

He was determined to get stronger and better and although he has chronic pain, he doesn’t let it get to him and always looks forward.  He began studying Business Administration at IDC and is in his last year. He also makes appearances as a Good Will Ambassador at fundraising events for Beit Halochem, a practical way of giving back, and spreading the word about what we do.

“My story is just one of many Israeli stories,” Fernando has said. “I want to thank the donors who make all this possible.”