“As far as I’m concerned, I haven’t finished serving my country.”

The young soldier from Holon could have joined “Shayetet 13” (the Naval Commandos), but he chose to follow his brother’s footsteps and serve in the “Giv’ati Brigade.”  He had completed an NCO course, and took part in ‘Operation Protective Edge’. Then he was critically wounded when a terrorist ran his car over him.  He is now recuperating from a premeditated hit-and-run terrorist attack. A long and difficult rehabilitation process has begun for Ashkenazi, including two complex surgeries. Nevertheless, he is certain his job is still ahead of him: “As far as I’m concerned, I haven’t finished serving my country”. 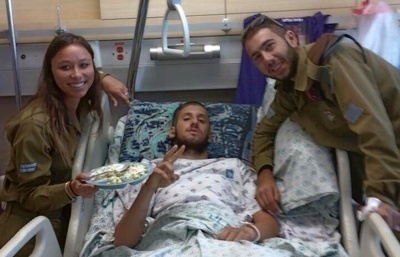 Yarin Ashkenazi, in the hospital

Three months ago, when the current wave of terror began escalating, First Sergeant YARIN ASHKENAZI from Holon was critically wounded when a terrorist ran him over with his car on Route 60 near ‘Ma’ale Levona’ in the ‘Binyamin District’.  Although he is only 21 years old, this was actually the 4th time Yarin had been wounded during his military service.  Despite the severity of this most recent injury, if you ask him, he would want to go right back to serving his country as soon as he is fit.

Ashkenazi, a student at Holon’s ‘Katzir’ High School had succeeded at the try outs for the Navy Seals but at the end of the day dreamt of wearing the ‘Purple Beret’ and serving in the Giv’ati Brigade. He wanted to serve where his brother had serves, and thus continue the family tradition.

In June 2014, Yarin had completed his NCO course. After serving in Operation Protective Edge he was given his first squad to command.  Later he was appointed to be the communications sergeant for the Regimental Commander. Then, he began to take the Senior NCO course. When the incident involving the tragic burning of the Dawabsha family at the Duma village in the West Bank was followed by tremendous tension and high alert in the IDF, Yarin was called to take part in active operational duty. Being recalled forced him to leave the Senior NCO course before it had ended.  In August 2015, he was posted near the village of Sin’gil, doing routine security patrols.  At the time, he did not sense that anything out of the ordinary was going to happen.

When he recounts the hit and run terror attack that followed, he has to rely mostly on the stories told by his fellow soldiers who were there with him.

“Two hours before it happened, I took a selfie with my communications equipment.  I love that photograph, I see myself in it looking ready to take on anything. Among the last things I actually remember was that a home front officer had wanted us to leave the outpost we were manning because some children had been throwing rocks at us.  We checked the other position and told him we’d rather stay put because the other outpost seemed to be too exposed…”

They kept that position and, “The next thing I remember is the three of us standing at the side of the road and a white Honda Civic coming at us at a very high speed.  Later I was told the driver had an axe in the car and was on his way to carry out a terror attack at a school.  Seeing us he must have thought we were an ‘easy target’, he could run us over and move on to the next attack.  He ran into the three of us, and afterwards we were medevacked/flown away.  Yuval and I were seriously wounded, Elbaz, our officer, was slightly injured and was able to shoot and kill the terrorist.”

Ashkenazi was in tremendous pain and the doctors on site had decided to put him under.

“I later learnt from one of the doctors who were first to arrive on site and treat us, that in my confusion and pain, I stood up, trying to lift my weapon and chase the terrorist,” Yarin recalls. “When I awoke at the hospital I didn’t remember much only that I’d been severely wounded”.

A Missile in Gaza

This was not the first time Yarin had been injured during his service.  On his way home with his family following the graduating ceremony of his NCO course, he was involved in a car accident with his family.  Yarin refused to be evacuated to hospital for fear it might affect his combat profile.

He sustained a further light injury during Operation Brother’s Keeper, which continued right until Operation Protective Edge began. “We were in Hebron searching a house for a suspected terrorist.  His family attacked us in order to give him time to escape, “Yarin states. “I was injured during this skirmish but was not going to let it stop our mission.”

Immediately thereafter Operation Protective Edge began in Gaza, “We all knew it was just a matter of time before we’d be called to go there.  We had been to Gaza and had seen the tunnels.  There was no way such a threat to our security could be ignored.  Those who were there, knew it was imminent.”

Looking back Yarin remembers that “the fighting began and we were gathered at the meeting place.  I informed my parents that I couldn’t talk to them because our cellphones were being confiscated. It was during that conversation that my mother told me that Bnaya Rubel z”l, a buddy of mine from the neighborhood, had been killed.  It was difficult to hear but made it even clearer how much our mission was important.  When our orders to move in arrived, we found ourselves walking on foot for about 4 hours inside Gaza.  During this time we were bombarded and shelled; it was incredible to see everyone, who despite all the walking they had done and the very heavy equipment they were carrying, began zigzagging and jogging the bombs like gazelles.  When you’re under attack, you forget the exhaustion and you do everything you were taught to do.” 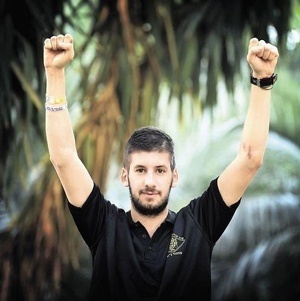 Yarin Ashkenazi would like to return to his unit.

An Every Day Hero

Yarin was wounded a third time when an anti-tank missile hit a house near the one where he and his comrades were regrouping. In recent months, Ashkenazi has been undergoing rehabilitation treatments at Tel Hashomer and Hadassah Hospitals.  He is there during the week and spends the weekends at home.

He still has a long road of healing ahead of him, after a head surgery in January, and a second complex surgery on his knee.

More than anything, Yarin would like to return back to his unit and his men.  He’s realistic and knows this might not be in the cards for him.  Either way, he feels he still wants to give back to his country in any way he can.